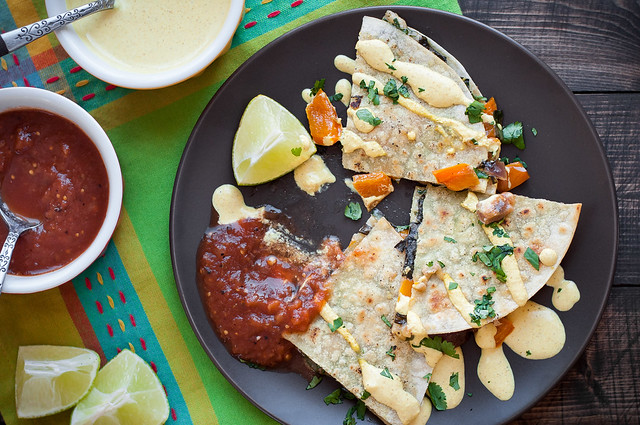 It’s a silly thought, I know. How can one ever tire of a good ol’ veggie quesadilla? Greens, peppers, onion, mushrooms, and whatever other vegetables you want to load it up with, all smothered with cheese and lightly fried between two baby corn tortillas. Serve them with a side of salsa, sour cream, or guac, and you have a complete meal, no matter what time of day it is. My personal preference is to enjoy quesadillas around 11:30 PM, usually after a margarita or two, so I can go to bed on a tummy full of delectable cheese. Kind of kidding, but sometimes you have to indulge and make bad food decisions. 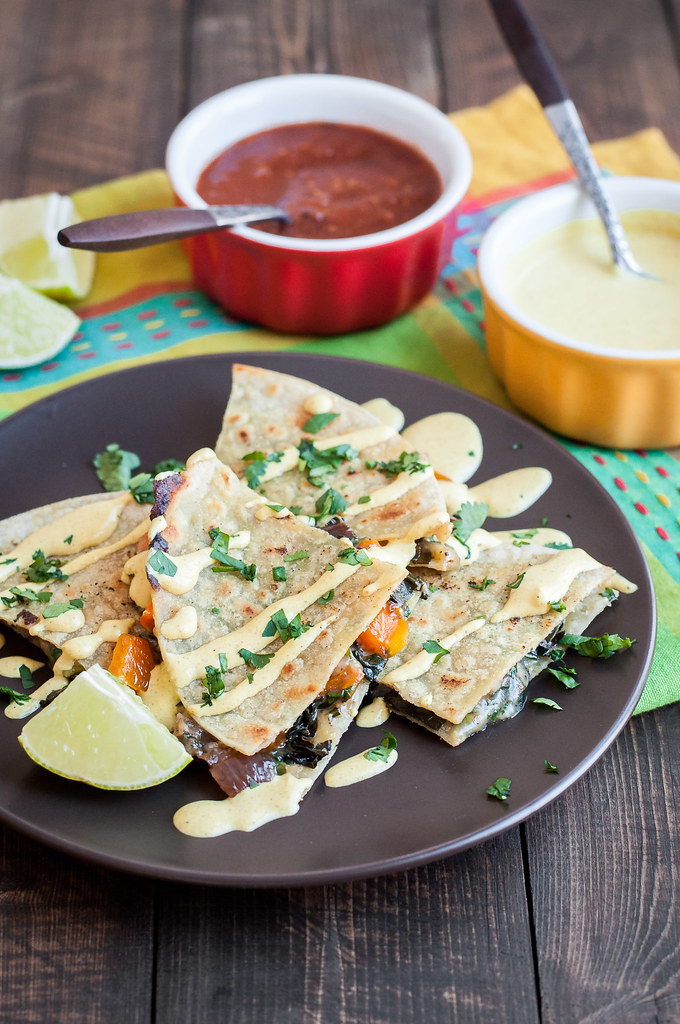 Despite the exalted status of the veggie quesadilla, though, I was recently inspired by an unlikely source to take my ‘dillas to the next level. The Indian-Mex (new thing) level of curry kale quesadillas. The culprit, of all things, is Beat Bobby Flay. First of all, say Bobby Flay ten times fast and try not to end up in a fit of laughter. When you recover, ridicule me for watching questionable television, and then go make these curry quesadillas. You might change your tune. Because, as I learned from Bobby’s likely defeated (I didn’t watch the end) competitor, Indian flavors in a quesadilla are not only a contradiction, but a simple way to highlight all the good things about often overused bell peppers. 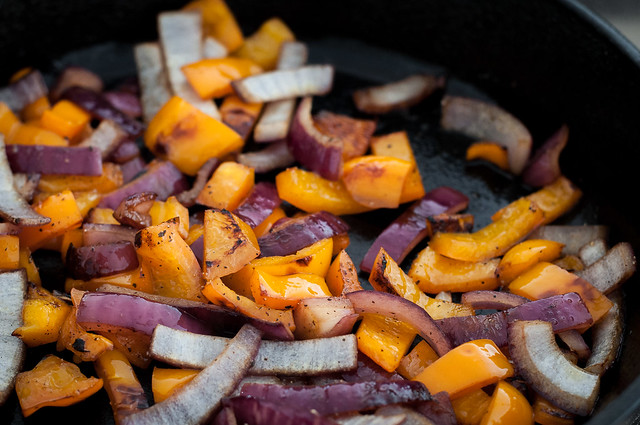 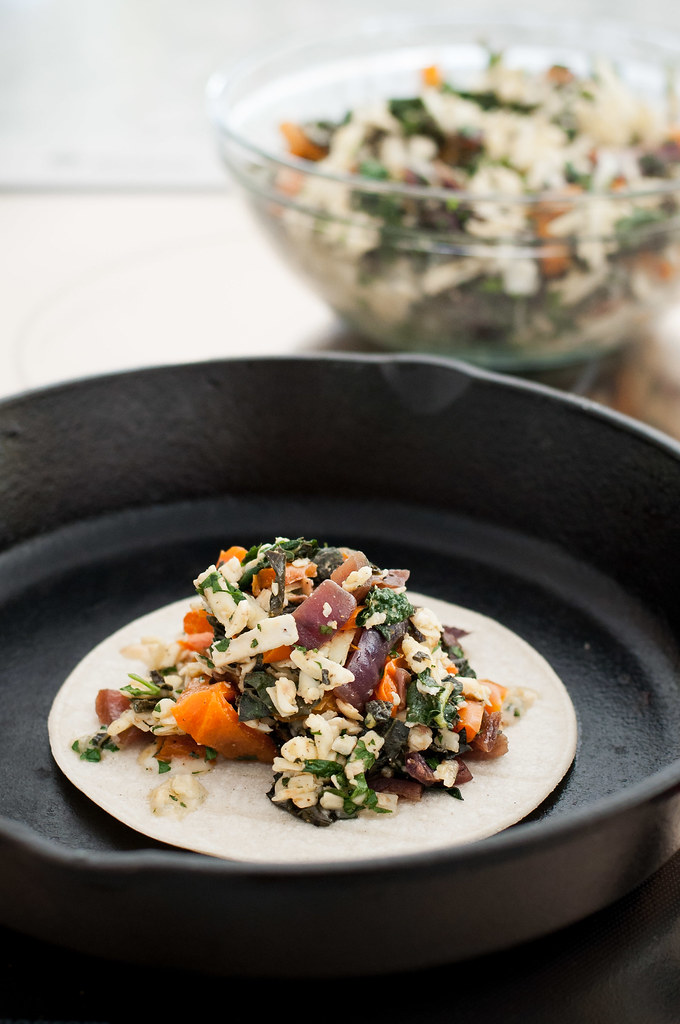 You know them well: those Costco or Sam’s Club 6-packs of multi-colored bell peppers that really are too good of a deal to pass up until you get home to your family of two and realize that you can only eat so much hummus and so many omelets. That was my attitude exactly until the stars aligned and I was so desperate for a puppy break that I would watch anything on Food Network, even terrible live cooking battles in which the stands are filled with tourists who were probably paid to be there cheering. Because who goes to New York for a filming of Beat Bobby Flay? If it’s you please don’t speak up. 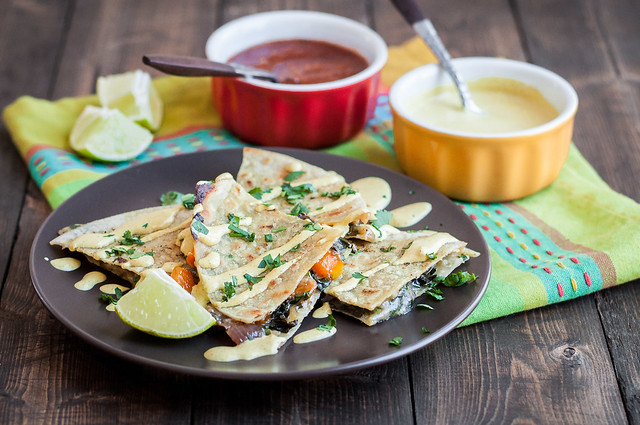 There’s nothing revolutionary about preparing these curry kale quesadillas except the end product that you put in your mouth. If you’ve made a quesadilla before, or even if you haven’t, you can throw these together just as quickly as the next no-recipe quesadilla. The sharp and creamy combination of manchego and havarti cheese builds on the exotic, cozy flavors in the recipe, but don’t feel the need to make an extra trip to the store for these varieties when you have a pound of cheddar, monterey jack, or even pepper jack cheese already in the fridge. A smoky salsa, like this one from Trader Joe’s, contrasts nicely with bright, complex curry, but if you can spare a few moments the day before, I highly encourage upgrading your sour cream to the included Indian spiced sour cream sauce. Besides using up one more of those prolific peppers, garlic and ginger and spices infuse the sour cream as it refrigerates and you’re rewarded with a sauce that tastes like something you might just find in an adventurous Indian restaurant. Bragging rights for you.

On another note, if you’ve been reading a while, you might have noticed that I just went record time–like maybe an actual record–without a blog post. And no, I haven’t just been chasing around our recently reformed snuggly puglet. Two years of blogging have flown by, and now it’s a part of my life, a creative outlet, that I could never give up. But when I think about the future of NCK or look around at all the other inspiring foodie websites and even cookbooks, I feel like I could be doing more for you guys, my readers. I work so hard at this endeavor, and it’s most certainly not for any money I might be making from it, but I haven’t checked off any of those big goals, like creating another free eBook or working to expand our community of healthy home cooks and comfort food lovers. So, in what seems on the internet like a quiet lull, I’ve actually been really working on a plan for this year to get to those things I just mentioned and more. It’s time to take some risks and see what this community can become if I don’t limit it to just frantically posting three times a week and answering blog comments. 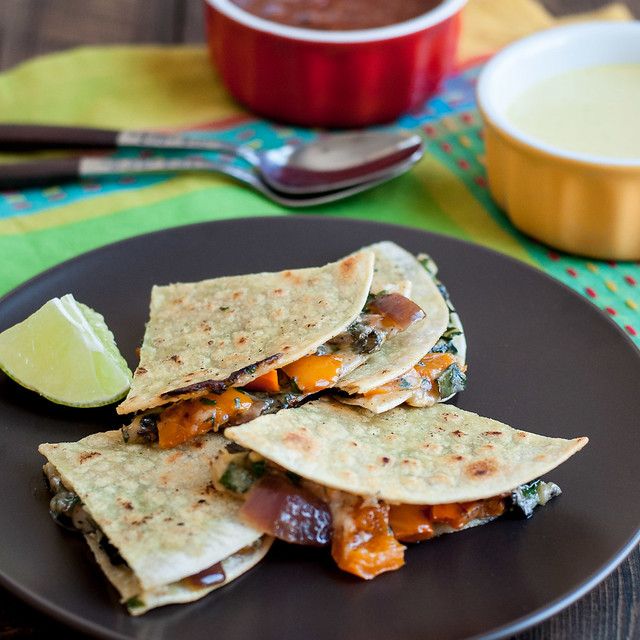 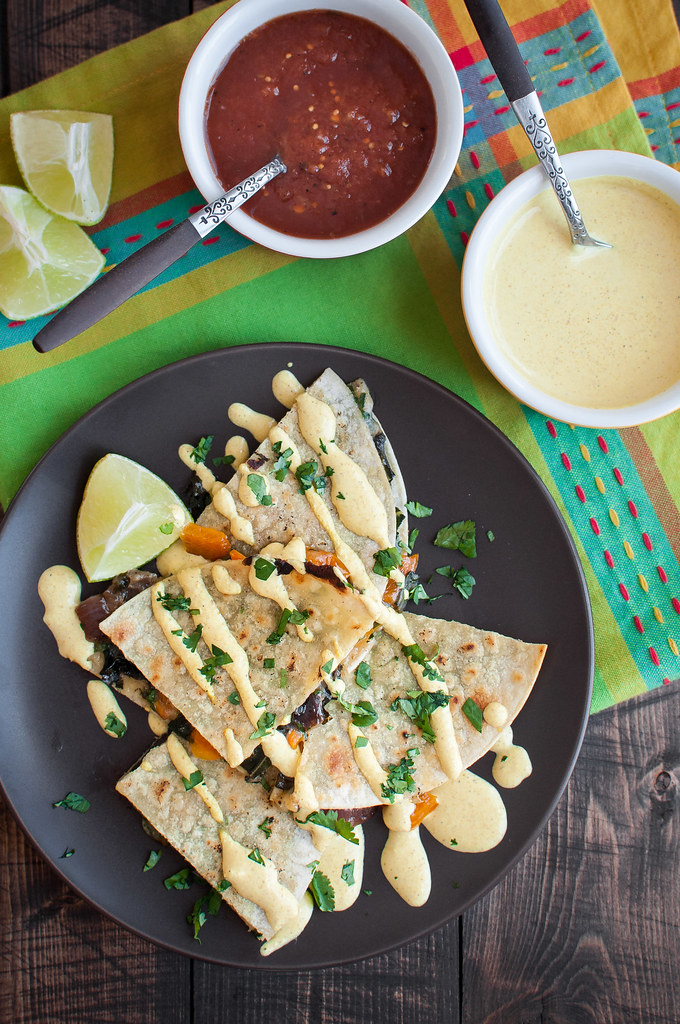 In practical steps, I’ve released a quick survey that I’d love for you to take. It’s for subscribers, so before you take it, just sign up here to get the free eCookbook that the survey references. Then take approximately 1.73 minutes to fill out a few multiple choice questions. None of that fill-in-the-blank/comment field nonsense (of course I’d still love your detailed feedback–just contact me here if you have more to say!).

And please, let me know about your new year’s endeavors. You can leave a comment below, and it doesn’t just have to be about curry kale quesadillas. If you’re going after big things in 2016, it’d be fun to get a little support going here. If nothing else, I’ll help you out with quick, healthy dinners so you can focus on making things happen.

Curry Kale Quesadillas with Sweet Pepper Sour Cream
Print
Ingredient prep
30 mins.
Cook time
30 mins.
Total time
1 hr.
Meatless and gluten-free. For extra quick assembly (or quesadillas all week), sauté the vegetables or mix the filling for these Indian-Mex quesadillas ahead of time. Havarti is a very soft cheese, perfect for quesadillas, but it softens quickly, so refrigerate it until ready to use. The sweet pepper sour cream is optional, highly encouraged, and does best made ahead so it has plenty of time to chill.
By: Tessa
Dish Type: Main Dish
Cuisine: Meatless
Makes: 4 quesadillas
Ingredients
Sauce
Quesadillas
Make It
Sweet pepper sour cream (makes 1 cup; 35 minute prep, mostly inactive)
Quesadillas
Notes
Make ahead options: these are a great make ahead dinner. Things you can do ahead: roast the yellow pepper, make the sauce, and prepare the filling.

Prep/cook time doesn't include making the sauce or waiting for vegetables to cool. Placing them in the refrigerator will make it quick.

Cook time is for making four quesadillas, one at a time. Keep quesadillas warm on a sheet pan in a low oven (250 F) while you make the others, if you're feeding 4 or more. You can easily make more than one at a time on a griddle pan.

You can use any kind of kale--I've tried both green curly and lacinato, both with success.
3.5.3208

Note: This page contains Amazon affiliate links to products on Amazon that will make cooking this recipe oh-so-enjoyable. There’s no extra cost to you for using the links to shop for these products and all your other Amazon needs, and you support NCK in the process. Thank you!

...my food philosophy in a nutshell. I'm Tessa, the comfort food lover, Minnesotan at heart, and home chef behind Natural Comfort Kitchen. Find out more about me, NCK, and my love for healthy, delicious food here.

Free one week dinner plan eBook when you sign up for weekly emails!

My food philosophy in a nutshell.

I'm Tessa, blogger and chef behind Natural Comfort Kitchen. Find out more about me, NCK, and my love for healthy, delicious food here.

Use this link to do your regular Amazon shopping, and NCK gets a little commission. Every penny goes into bringing you more healthy, fun recipes.