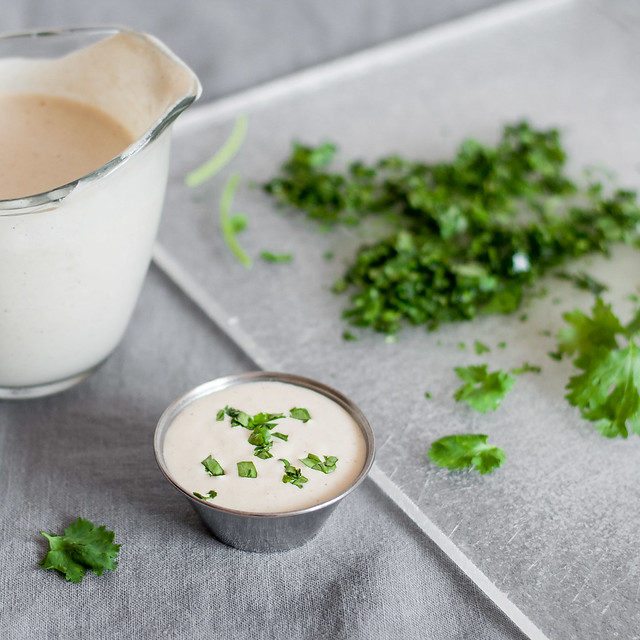 Let’s get one thing straight: I’m not quitting sour cream. The stuff is a commodity in our fridge, which isn’t surprising considering my affinity for Mexican food. I love to throw a dollop onto tacos, a rice bowl, a pile of lentils, or into a batch of creamy enchiladas. Um, okay, maybe that’s more than a dollop, which further supports my point. During busy tax season in my early accounting career, when I was wiped and hungry arriving home at 10 PM, my all-time favorite was, and maybe still is, to mix up equal parts sour cream and jarred (gasp!) salsa for a creamy tortilla chip dip. Basically, I have a terrible love affair with sour cream.

As my wedding approaches, though, and as I’m increasingly motivated by Rich Roll to replace animal products with plant-based versions, a daily dollop of sour cream doesn’t really work. Daisy definitely won’t be contacting me for any endorsements after that statement! Sour cream is a seemingly easy replacement, but there’s just one minor problem: all the vegan versions I’ve encountered are gross, grainy, or otherwise weird. And if I won’t eat them, I dare not even present them to my fiancé. It takes nothing short of a miracle to impress him with a vegan replacement for a favorite dairy product. I tried packaged vegan sour cream a long time ago and don’t really remember it, except that it didn’t inspire repeat purchases. 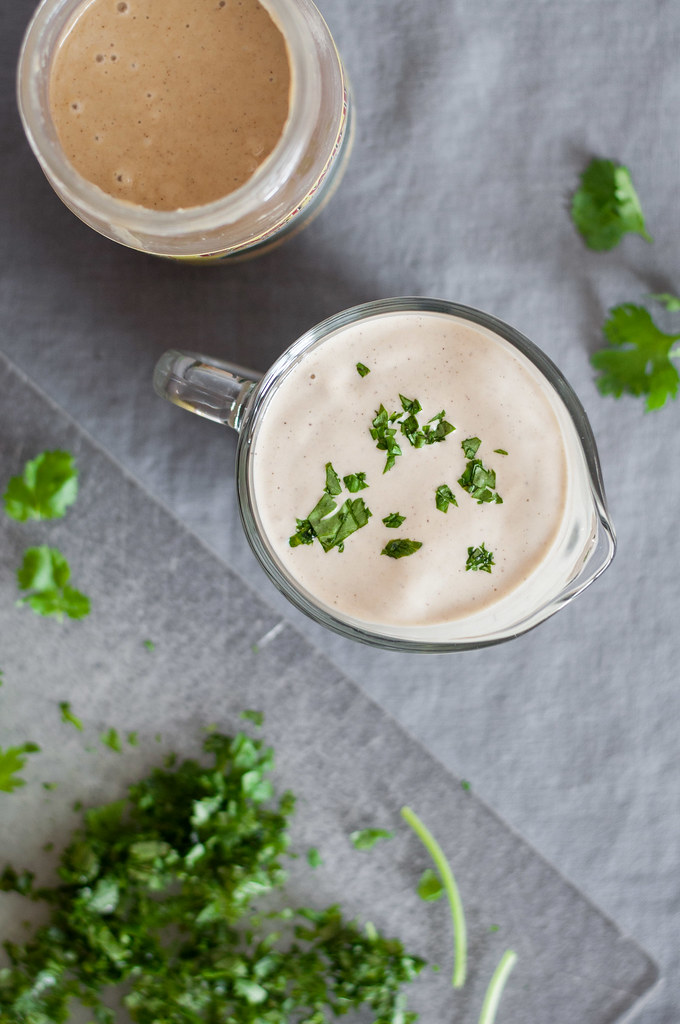 Most recipes online include cashews or tofu. Personally, I’m fine with cashews, but you, or your allergy-prone kiddos, may not be. Also, who, literally, who has their wits about them to set out a bowl of raw cashews to soak at 10 PM before bed??? Don’t I have enough night time reminders in my phone already? And when I said I’m fine with cashews, I meant occasionally as a snack, but I’m not fine with their price tag for bi-weekly batches of vegan sour cream. It just seems like a travesty to me to soak and blend them when they’re so delicious on their own. Last but not least, and maybe I’m doing something wrong, my cashew cream turns out grainy 99% of the time, causing major texture anxiety.

With cashews out, some vegan sour cream recipes use tofu. Again, an item I’m fine with. In fact, I’m one of those weirdos who actually loves tofu, so I probably wouldn’t mind tofu-based sour cream. However, it’s bland by nature, which really bulks up the ingredient list in the form of different seasonings and the quantity of acid needed to achieve sour cream’s signature tang. Even if all that was fixable, there is no way in this life that tofu sour cream would pass muster with my soon-to-be spouse. He can sniff the stuff out a mile away. It’s a great strategy for keeping him away from my burrito bowl at Chipotle, but not such a great formula for vegan sour cream. 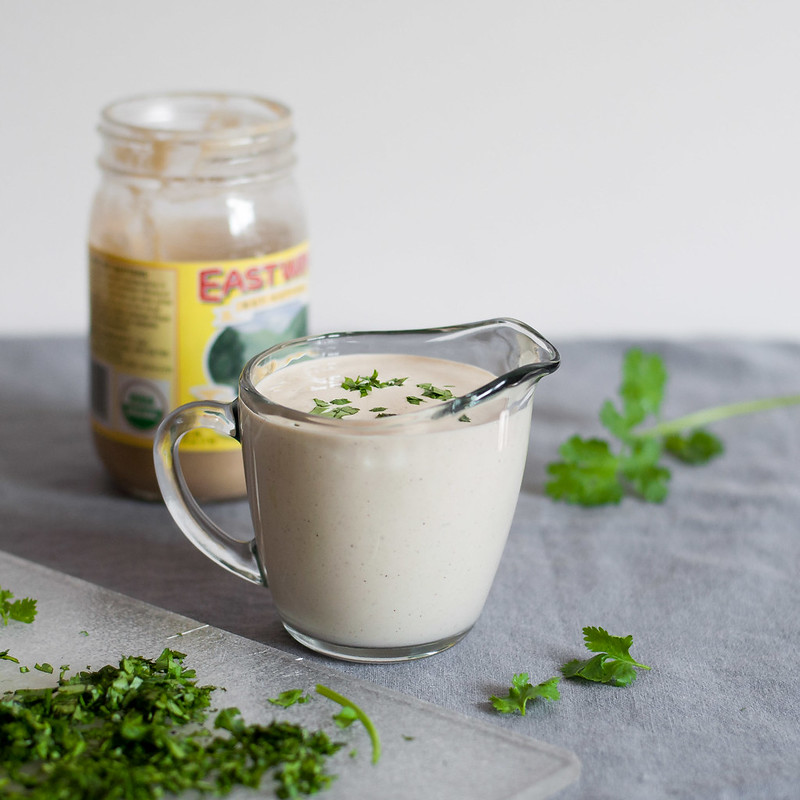 So this looks bleak, right? But obviously if I’m sharing this recipe today, I’m confident in my solution to the vegan sour cream dilemma which consists of…drumroll please…tahini!!! Say what? My food knowledge has expanded exponentially of late, and I’m not ashamed to admit that five years ago, I probably couldn’t tell you what tahini was or where to purchase it. The answers are simple: it’s sesame seed “butter” and it’s available at any grocery store with a decent selection of healthy and/or international cuisine, online, and possibly even in bulk at Costco or Sam’s Club. Because once you try this stuff, you’ll need vats of tahini for the quadruple batch of vegan sour cream that you make every week. 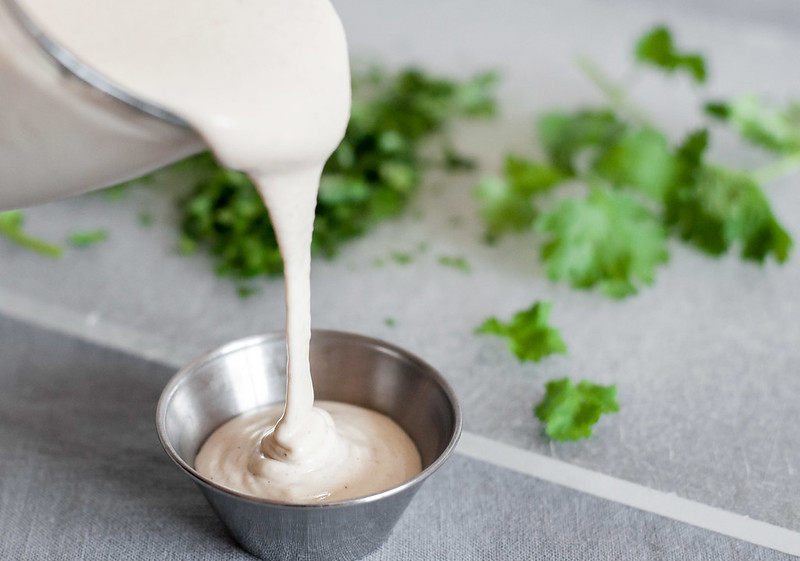 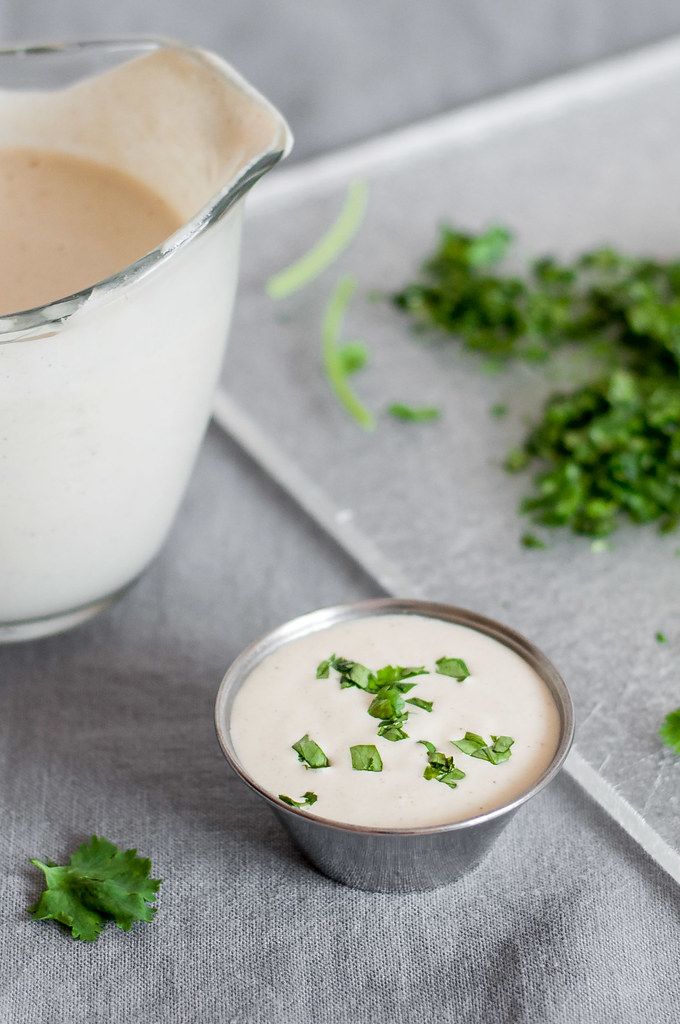 Just as spaghetti squash, however much we love it, will never get confused with a real pasta noodle, tahini vegan sour cream isn’t going to taste identical to dairy sour cream. It’s smooth and creamy like the dairy version, but it does have a nutty sesame taste, as expected from sauce composed almost entirely of sesame seeds. Here’s how I introduced it with success: at your next taco or chili buffet, set out the container of dairy sour cream and the new vegan sour cream. Don’t just yank everything your household knows and loves; do it gently. Leading by example, not with force, is the best tactic I’ve employed in introducing healthy changes at home. It’s how I got Steve Steve decided to drink his first green smoothie and sometimes choose meatless meals, even when he’s at work, unsupervised by me, at lunch. It’s just so much more enjoyable to live with balance, free of absolutes. A huge burden is lifted when you’re not constantly trying to change the uncontrollable, and you might be surprised at who volunteers to try some vegan sour cream without any prompting whatsoever.

Nut-Free Vegan Sour Cream
Print
Ingredient prep
5 mins.
Cook time
Total time
5 mins.
Addicted to sour cream? So was I, but all that dairy isn't great for your health or waistline. Change up your sour cream routine with a simple tahini version. Lime juice adds a touch of Mexican flavor and that tang you might miss from dairy sour cream. Use it anywhere you'd use cold sour cream, or thin it with more water and use it for a healthy but creamy salad dressing!
By: Tessa
Dish Type: Condiment
Cuisine: Vegan
Makes: 1½ C
Ingredients
Make It
Notes
If you want enough for 4 without leftovers, halve the recipe. However, the larger batch you make, the better the blender generally handles it.

If tahini is separated in the jar and very difficult to scoop out, empty the whole jar into blender and process until smooth. Replace into jar, leaving the quantity you need in the blender.

If you can find raw tahini, use it! I've heard a lot about raw tahini lately, but haven't been able to find it except online. For most tahini, the sesame seeds are toasted before being processed into tahini, but raw tahini skips toasting. You'll note a slightly bitter taste in conventional tahini, which is apparently barely discernible in raw tahini.

Note: This page contains affiliate links. It does NOT contain sponsored content. Affiliate links (to products I recommend, on Amazon) offset my ingredient and website maintenance

costs, so I can keep bringing you tangy recipes like this one. Thanks!

...my food philosophy in a nutshell. I'm Tessa, the comfort food lover, Minnesotan at heart, and home chef behind Natural Comfort Kitchen. Find out more about me, NCK, and my love for healthy, delicious food here.

Free one week dinner plan eBook when you sign up for weekly emails!

My food philosophy in a nutshell.

I'm Tessa, blogger and chef behind Natural Comfort Kitchen. Find out more about me, NCK, and my love for healthy, delicious food here.

Use this link to do your regular Amazon shopping, and NCK gets a little commission. Every penny goes into bringing you more healthy, fun recipes.